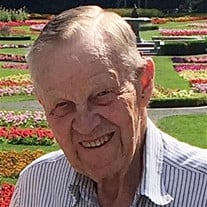 Devoted and patient husband, kind and loving father, innovative and wise rancher and farmer, and active and caring community member; Ralph Ernest Fred Reifenberger died peacefully at the age of 95 on February 10, 2020. Ralph’s life was framed by family, friendship, faith, and hard work. He led a life of integrity, had an engaging sense of humor and a gentle, caring strength. Ralph was born June 18, 1924 in Spokane, Washington to Fritz and Elsa Reifenberger. He grew up as an only child on the Reifenberger Ranch, in Fairfield, Washington, where he and his Dad and Mom raised Black Angus cattle and sheep and farmed the land. He was industrious and adventuresome. At 14 he bought his first car (a non-working model T) from the neighbor for $5, fixed it in the driveway, and drove away! In 1939 he traveled to the San Francisco World’s Fair, showing his sheep taking top awards including the National Grand Champion. Ralph graduated from Fairfield High School in 1942 with 30 classmates, many of whom became lifelong friends. He attended WSU for business and accounting classes, returning home each day to the ranch. He fulfilled one of his dreams – getting his pilot’s license, buying a plane, and spending many weekends flying. The decision to make farming his life long career instead of becoming a commercial pilot was a pivotal moment. He shared that he chose farming because it was more conducive to family life. In May of 1949, he married Geraldine Swartz, who he met on a double date! As a wedding gift to one another, they purchased a ‘49 truck (still in the family) and hauled prized Black Angus all over the country to shows and auctions. After being married for 68 years, Ralph’s sweetheart, Geraldine, died on February 12, 2018. Their love story was featured in the Spokesman Review in 2013, where Ralph was quoted as saying: “I married a city girl and transplanted a rose.” Together they raised two daughters on the farm they purchased a mile down the road from his boyhood home. Many family and friend gatherings were enjoyed on the farm. Ralph was proud of his German heritage and was a lifetime member of the Zion Lutheran Church. He enjoyed his town and friends and was always willing to help where needed. He was active in his community; serving and volunteering in clubs and organizations. He was instrumental in starting a local library, the first Kindergarten, and helped with funding and construction of the local nursing home. He contributed many hours to 4-H, Grange, the Service Club, and later in his life the Historical Society and Food Bank. He touched many people and was well respected and loved. He was a natural storyteller, captivating family and friends up to the last week of his life. A highlight for his granddaughters was hearing “Grandpa’s greatest hits!” Ralph is survived by two daughters: Joan (Ginny); Lois (Paul) Christensen; four granddaughters: Megan (Jacob), Karli (Mitchell), Hannah (Ben) Page, and Abigail (Colton) Stepper: five great-grandchildren: Ezekiel, Elsa, and Jackson Stepper, Elliott and Ethan; also, his brother-in-law and lifelong friend, Howard Herman, dear sister in law, Darlene Herman, and numerous beloved nieces, nephews, and cousins. His presence will be greatly missed, but his legacy of love, laughter, faith, and family will live on in our hearts. In his honor, memorials may be given to: Palouse Country Assisted Living or Hospice of Spokane Hospice House South. A Memorial Service will be determined at a later date.

The family of Ralph Ernest-Fred Reifenberger created this Life Tributes page to make it easy to share your memories.