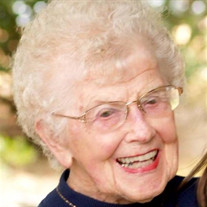 Marjorie Spears, (Age 102) was born May 28, 1915 in Minneapolis, Minnesota. She passed away the morning of February 14, 2018 at Fairfield Care in Fairfield, WA. At the tender age of 4, her mother died in the flu epidemic, leaving her father with three children, the youngest just a baby. Eventually, her father could see nothing else to do but to put the children up for adoption, and eventually Marjorie and her brother were adopted by Mr. and Mrs. Ward Thompson, Sr., who were living in St. Paul, Minnesota. The family then moved to Butte, Montana, where her adoptive father established a paper company. After graduation from Butte Business College, Marjorie moved to Miles City, Montana to work for the Highway Department. There she met the love of her life, Gordon Spears. During World War II, because they had two children and the man working on Gordon’s father’s ranch was single, they were told they had to move out to help on the ranch in place of the single man. Thus began about 30 years of operating a successful cattle ranch/wheat farm. During this time Marjorie got involved with the Montana Cowbelles and served as the state secretary for a time. In 1974 after visiting their daughter and son-in-law at Latah, Washington they fell in love with property there and moved the following year, tearing down an old house and building a new home by themselves from basement to roof. Gordon passed away in 2002, but Marjorie remained in the home until the age of 98 when she fell, cracking her pelvis. Thereafter she moved into Fairfield Care in Fairfield, Washington and lived there under the loving care of the staff until her death. She had a wonderful 100th birthday party there with two state representatives present. Marjorie loved to sew and to knit, making 150 to 200 of the heavy Canadian knit coats for people who learned of her abilities. She made many baby sweaters for many people and sweaters for her family as well. She leaves a wonderful legacy serving others and loving her Lord and Savior, well known as a prayer warrior. She is survived by her children, Lee Spears who lives in the original farm house north of Miles City, Montana, Lynn Schafer at Latah, Washington, and Carole Raymond at Forsyth, Montana, as well as 4 grandchildren and 12 great grandchildren. A memorial service will be held at a later date at Marjorie’s home church, Latah Country Bible Church in Latah, Washington. Donations can be made to Fairfield Care Center, 501 SHillside Ln, Fairfield WA, or Latah Country Bible Church, Box 79, Latah, WA.

Marjorie Spears, (Age 102) was born May 28, 1915 in Minneapolis, Minnesota. She passed away the morning of February 14, 2018 at Fairfield Care in Fairfield, WA. At the tender age of 4, her mother died in the flu epidemic, leaving her father... View Obituary & Service Information

The family of Marjorie Spears created this Life Tributes page to make it easy to share your memories.