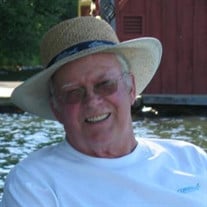 LaVaine A Logan, age 84, died peacefully on November 30, 2017 surrounded by family at Fairfield Care. He was born in Circle, MT on March 2, 1933 to LaVerne and Virginia (Pardis) Logan, and was the oldest of 3 children. He graduated from Circle High School, and in 1951 married his high school sweetheart Arlene (Visser) Logan. They were blessed with 4 children. He started his sales career selling and repairing IH cream separators and refrigerators at the age of 12. LaVaine started selling the “red stuff” (IH) and never moved to the “green” (JD) pasture. In 1973 he moved his family to Moscow, ID to continue selling IH there. After two years they moved to Othello, WA for the same reason, and then finally to Fairfield, WA in 1978 where they settled. He and Arlene built a home together in Fairfield where they could enjoy the beauty of the Palouse and of Mica Peak, and hosted many happy family gatherings over the years. LaVaine always joked he would retire when wheat was $10 and at age 75, when wheat hit $10, he decided to retire. LaVaine enjoyed the lake cabin and fishing at Coeur d’Alene Lake with his friends and family, and played cards with Arlene almost every night. They especially enjoyed pinochle although he lost almost every game. LaVaine will be remembered for his contagious smile and big laugh, that he was always quick to make a good joke, and that he never wavered in his principles. He was a devoted husband, a warm-hearted and gregarious friend, and a supporter and role model for his family. He was preceded in death by his parents, LaVerne and Virginia, his oldest daughter Linda, and extended family Gary and Dale Bond. He is survived by his wife of 66 years Arlene Logan, daughters Joan (Lonnie) Pawlowski, Jackie (David) Schillinger, son Jerry (Judy) Logan, 6 grandchildren, 8 great grandchildren, sister Lorraine (Milton) Koppenhofer, and brother Lee Logan. At his request no local service will be held. A private service will be held in Brockway Montana with family at a later date. In Lieu of flowers, memorial contributions may be made to Fairfield Care, 503 S Hilltop Lane, Fairfield, WA 99012.

LaVaine A Logan, age 84, died peacefully on November 30, 2017 surrounded by family at Fairfield Care. He was born in Circle, MT on March 2, 1933 to LaVerne and Virginia (Pardis) Logan, and was the oldest of 3 children. He graduated from Circle... View Obituary & Service Information

The family of LaVaine A Logan created this Life Tributes page to make it easy to share your memories.