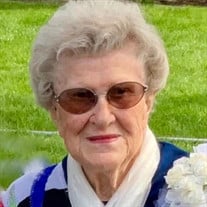 Helen Towne Widman, May 12, 1922 - March 7, 2020. 97 years old. From horses to space shuttles, babies to great-grandchildren, typewriters to iPads, significant changes in transportation, communications, and modern conveniences have embodied and enhanced Helen Widman’s life. Her historical Palouse family roots run deep. Her grandmother, Nancy Bourn West, crossed The Oregon Trail with her family by means of ox team and covered wagon at age two, settling in the Rosalia area. Her grandfather, Mahlon H. West, was a stagecoach driver in the Palouse Country in 1878-79, driving from Colfax to Spokane. Helen admired a great aunt, Leoti L. West, who establish The Colfax Academy, the first high school north of the Snake River in 1878 and went on to shape education in Washington State. Her parents imprinted upon Helen Christian morals and hard-working values. She was a lifetime learner, enjoying the love and laughter of young children, family, farm life, picnics, afternoon naps, and good cookies. She has been an inspiration and a wonderful example for friends and family who dearly loved, admired, and cherished her caring, fun-loving, happy attitude, listening ear, and wise counsel. Helen unexpectedly passed away quietly while sitting in her chair having coffee on the morning of March 7, 2020, with her daughter. She was born in Rosalia, WA on May 12, 1922, to Verne and Lena West Towne, the fifth of six children. She hopscotched and skipped her way through the worst days of the Great Depression, graduating from Rosalia High School in 1940. Harvest crews traveled from town to town in those days, seeking work. The farm community would gather on the streets to buy their weekly supply of groceries and listen to the open-air band concerts. Helen played an Alto horn during those band concerts. Her musical background also included violin performances while in high school and college. She attended WSC (WSU) until the start of WWII, and then held a job in Spokane at the Galena Air Depot (Fairchild AFB). Three years later she rode the train to Washington DC where she worked for the Post Office Department and lived with her sister who was stationed there as a WAVE in the service. Helen never forgot driving a car, filled with passengers, through the streets of Washington DC on VJ day, inching along among the frenzied, happy people celebrating the end of WWII. Returning to Rosalia, Helen was recruited to work at Mt. Rainier during the summer season. Short employment as a bank teller followed. She also worked as a part-time legal secretary in her father’s law office and, in later years kept financial records of farming and ranching operations. Romance blossomed with a hometown boy and fellow schoolmate of 12 years. She was married in 1947 to Edgar Widman. They settled on farm property near Rosalia raising wheat, barley, peas, cattle, horses, - and six children! For twenty-five years they also enjoyed their cabin at Priest Lake, Idaho, which was the focal point for many relaxing and pleasant gatherings. Helen was active in the Rosalia Methodist Church Sunday School, choir, and Methodist Woman’s organization. She served on the Board of the Rigg’s Cemetery Association, was active in Lion’s Club, and helped erect a monument in the city park that represents the founding of the town of Rosalia. After 55 years of marriage, Edgar passed away in 2002 from a short bout with cancer. Helen sold her farm home and property to a grandson and became a resident of Orchard Crest Retirement Center in Spokane, 2004. Her hobbies included hand and machine sewing, reading, writing, and baking cookies to keep the kitchen cookie jar full. Helen was preceded in death by her husband, Ed Widman, her son, Fred Widman, her parents and her five siblings: Vernon Towne, Ralph Towne, John Towne, Margaret Fry, and Ruth Granlund. She is survived by her children, Barbara (Bruce) Bothman, Don (Elaine) Widman, Nancy (Dave) Granlund, Ben (Linda) Widman, John (Jerri) Widman, many nieces and nephews, grandchildren and great-grandchildren. Her family had planned a church service, but due to the seriousness of the Coronavirus, this has been changed to a graveside service on March 21, 2020, 11:30 a.m., at the Rosalia IOOF Evergreen Cemetery. Friends of Helen are welcome to attend. In lieu of flowers, consider doing a simple random act of kindness as you think of Helen. Or, if you wish, contributions in her honor and memory can be made to Rosalia Community Church, PO Box 202, or Rosalia Museum, PO Box 277, Rosalia, WA 99170.

The family of Helen Towne Widman created this Life Tributes page to make it easy to share your memories.