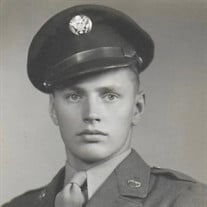 Earl Norton Bothman, 94, passed away in Fairfield, Washington on February 16, 2019. Earl was born in St. Hilaire, Minnesota on November 15, 1924 to Frank and Esther Bothman. He grew up on the family farm with his four brothers and two sisters. In 1942, Earl joined the US Army Infantry and served during World War II. After returning home to see his family, he then moved out West to Washington State to look for work. He found work on a farm near Plaza, Washington. At that time he met his loving wife, Marion; they were married in Fairfield, WA in 1930 and were married for 71 years; they had two daughters, Pamela and Cheryl. Earl and Marion settled in Fairfield, WA in 1955; Earl worked for the Town of Fairfield in maintenance for 13 years and developed a strong bond with this small community before beginning his farming career in 1968. Earl was an avid outdoorsman and enjoyed fishing and hunting throughout his life. After retirement, he devoted his time to fishing whenever he could, and enjoyed steelhead fishing with his nephews, friends and family. He treasured time spent on the water. Earl was a member of Waverly Masonic Lodge, Volunteer Firefighters and Fairfield Presbyterian Church. He is survived by his wife, Marion; daughters Pamela Mundt (Chris); Cheryl Peringer; granddaughters Carissa Schmitz (Dan); Stacey Peringer; Sara Leonetti (Dan) and great grandchildren, Zoe and Jaxen Leonetti; sisters Evelyn Mundinger and Alice Kisslinger; nephews Bruce, Bergen, Dean, Greg, Mike Bothman and niece, Roberta Cook. A celebration of Earl's life will be held on Saturday, March 9th at 10:30 am at Rosalia United Method Church, Rosalia, WA, followed by a private family graveside. The family suggests that memorials be made to Palouse Country Assisted Living, 503 S Hilltop Lane, Fairfield, WA 99012 or Rosalia United Methodist Church. The family would like to extend heartfelt thanks to all of those who provided excellent care for dad over the past few months and a special thank you to all of his visitors during this time.

Earl Norton Bothman, 94, passed away in Fairfield, Washington on February 16, 2019. Earl was born in St. Hilaire, Minnesota on November 15, 1924 to Frank and Esther Bothman. He grew up on the family farm with his four brothers and two sisters.... View Obituary & Service Information

The family of Earl Norton Bothman created this Life Tributes page to make it easy to share your memories.