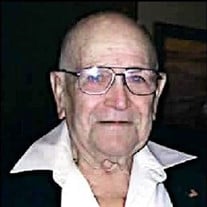 Donald Ottosen passed away peacefully in his sleep, with family present, at his home in Spokane Valley, WA on April 25, 2019. Donald was born on November 8, 1929 in Fairfield, WA to Elmer and Olive Ottosen. He lived in the Mt. Hope and Fairfield area for most of his life. Donald married Donna Baughman from Tekoa in 1950. Together they have a daughter, Lynne, and three sons, Kevin, Lon, and Brian. Donald began working as a parts man at a farm machinery dealership in Fairfield, advancing to salesman, and later, with two friends, purchased the business in 1968. After retiring from the machinery business, he continued farming in the Spokane Valley for a number of years, and finally retired to his true love working in his yard and garden with his wife Donna. Outside of family and his gardens, Donald kept busy keeping up with family activities and was involved in any community project that was organized. He loved to sing and was called upon to sing at hundreds of weddings and funerals. He also loved dancing, and was able to continue until he was 87! In 2011, Don was diagnosed with cancer and moved with Donna to the Spokane Valley, where he lived until his death. Donald was preceded in death by his parents and his sister Helen. Donald is survived by his wife of 69 years, Donna, daughter Lynne - Spokane, Kevin (Gayle) and Lon (Terry) Fairfield, and Brian Spokane, 10 grandchildren, 18 great-grandchildren and two great-great-grandchildren, numerous cousins, nephews and nieces. He will be missed by all. A private family burial will take place at the Mt. Hope Cemetery followed by a Memorial service at Spokane Valley Baptist Church, 1222 S. McDonald Rd., Spokane Valley on Saturday, May 4, 2019 at 2:00 p.m. with a reception following at the church. In lieu of flowers, memorials may be made to the Leukemia-Lymphoma Society, 123 NW 36th St., Suite 100, Seattle, WA 98107, or to Hospice of Spokane, 121 S. Arthur, PO Box 2215, Spokane, WA 99210, or donors' choice.

Donald Ottosen passed away peacefully in his sleep, with family present, at his home in Spokane Valley, WA on April 25, 2019. Donald was born on November 8, 1929 in Fairfield, WA to Elmer and Olive Ottosen. He lived in the Mt. Hope and Fairfield... View Obituary & Service Information

The family of Donald Ottosen created this Life Tributes page to make it easy to share your memories.

Donald Ottosen passed away peacefully in his sleep, with family...