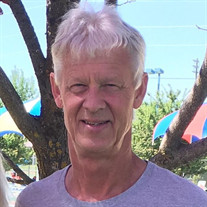 Christopher “Chris” Mark Brown, 62, a lifelong resident of Rosalia, WA unexpectedly passed away on May 4, 2018. Chris is survived by his beloved wife and best friend of 40 years, Candie, daughter Lisa (Dustin) Gurkowski, son Kelly Brown, daughter Kati (Randy) Widman, six grandchildren Avery, Kyla, Ryker, Alec, Titan, and Jaxton, mother Ruth Brown, brothers Tim (Kathy) Brown, Greg Brown, Pat (Tami) Brown, Dan (Michelle) Brown, sisters Denise Brown and Teresa (Roger) Woodward, and many loving nieces, nephews and extended family. He was preceded in death by his father, Roy Brown, and his mother and father in law, Ronnie and Sharon Lawson. Chris’ unconditional love for his family was endless. He was an absolutely amazing son, husband, Dad, Pocky, and friend to all. Chris was born and raised in Rosalia, WA graduating Rosalia High School in 1974. Chris began working at Cash Hardware (now Pape Machinery) on April 1, 1975 and was the Service Supervisor. His knowledge of John Deere equipment was limitless and will be irreplaceable. Chris loved his John Deere and farming community, who over the years became family to him. Chris joined the Rosalia Fire Department in 2001. Not only did Chris enjoy serving the Rosalia community, but also the surrounding communities. Chris enjoyed farming with his wife Candie at their family ranch. He loved to complete wood working projects, tinker in his shop, all sports and endlessly playing with his grandchildren who absolutely adored their Pocky. Chris’ love and support of his family was undying. A heartfelt thank you to the personnel of the Rosalia, Tekoa and Oakesdale Fire and Ambulance Departments, Life Flight Helicopter,,Washington State Patrol, Whitman County Sheriff’s Office, the Good Samaritans, and two unknown Good Samaritan EMT’s who tirelessly assisted Chris. Also, thank you to Rockford Auto and to Schanzenbach Funeral Home and Rose Garage for all of the arrangements. Graveside funeral services for Chris will be at the Thornton Cemetery on Saturday, May 19, 2018, at 11:00 a.m. inThornton, WA. A potluck gathering will follow at the Rose Garage, in Rosalia, WA. Memorial donations may be made to the Rosalia Fire Department at P.O. Box 291 Rosalia, WA 99170

The family of Christopher Mark Brown created this Life Tributes page to make it easy to share your memories.