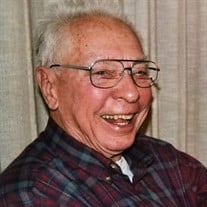 Bert Fredric Wolfrum (aka Fritz, Fred) passed away October 9, on his father’s 119th birthday. Bert was born August 16, 1933 in Wauwatosa Wis. to Englebert and Augusta (Krueger) Wolfrum. He graduated from Wauwatosa High School in 1951, and saw the movie, “Red Skies of Montana” about Smokejumpers, that forever changed his life. Bert went to college at the University of Montana in Missoula where he majored in business. He worked for the Forest Service and jumped 151 times out of perfectly good airplanes over raging forest fires, as a Smokejumper. A plane crash in 1953, and the Higgins Ridge forest fire in 1961,malmost took his life, but this was the work he loved, and memories from this special time would remain with him all of his life. He was a member of a crew that were the first Smokejumpers in Alaska. He loved to attend the Smokejumper reunions which his kids affectionately referred to as “Liars Conventions” and would remain life-long friends with his crew members. Bert joined the Air Force and was stationed in Alaska when he met a pretty nurse, Betty Brenden, in a bar. They married April 15, 1961 in Bozeman MT and he finally bought his first of many dogs, a black lab puppy he had been dreaming about. Four little kids followed in quick succession and Bert changed his career to the Air National Guard. He continued to work for the Forest Service and the “Guard” in Montana, Idaho, Washington and Alabama. While living in Spokane in 1973, Betty told Bert that they were “ NEVER moving again!” Lo and behold, a friend showed him a pretty piece of property outside of Spangle, WA that was the perfect place to raise four kids. Bert and his family loved “Fritz’s Funny Farm” where there was always an extra place at the table, a pool party or card game going on. Bert was a member of the Spangle Service Club and the Liberty School Board. After his retirement, he started a gravel pit, worked as a janitor, and along with Betty, ran a lentil soup business, Country Harvest. He was a life long Green Bay Packers fan. Bert loved to rake, shovel, putter around the farm, hunt with his sons, vacuum, stack firewood, watch his daughters ride their horses, and sing about swimming with bow legged women. In later years, he loved to play with his grandchildren. He could often be seen in the summer months wearing his favorite outfit: cutoff denim shorts and shirt, t-shirt, and White’s boots. We were always glad when the snow started to fall and he would put that outfit away! Bert could fix anything and was very good at organizing. He did countless home and farm improvement projects, and was always willing to help his neighbors. Bert is preceded in death by his parents, Engelbert and Augusta (Krueger) Wolfrum, and sister Lois May Wolfrum. He is survived by his wife of 57 years Betty (Brenden) of Fairfield WA, sons Burt (Kim) Wolfrum of Grangeville ID, John Wolfrum of Two Rivers Alaska, daughters, Mary (Joe) DeStaffany of Conrad MT and Julie Wolfrum of Spangle WA, and many cousins in Wisconsin. He has seven grandchildren: Nathan Horton, Megan Horton, Andrew (Taylor) Horton, Katrina Wolfrum, Anna Wolfrum, Frank Wolfrum and Silas Wolfrum, and former son-in-law,Roger Horton. A memorial service will be held at a later date. In lieu of flowers, please make a donation to a pet shelter of your choice.

The family of Bert Fredric Wolfrum created this Life Tributes page to make it easy to share your memories.