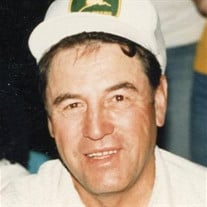 Alvin (Al) Carl Hass of Fairfield, Washington passed away December 5, 2017.  Al was born May 23, 1930 in Tekoa, Washington to Martha and Carl Haas, and graduated from Fairfield High School in 1949.  After graduation, he worked on the family farm until he was drafted into the Army in 1952.  He was first stationed in California but in 1953 was transferred to Korea during the Korean War.  He spent ten months in Korea then returned home to resume farming.  When he was not busy on the farm, he refereed basketball games for the Whitman County schools.  During his sixteen years of being a referee, he officiated seven State tournaments.  In 1967, along with some good friends, he bought Cornwall Machinery. The name was eventually changed to Bistate, but for the next 25 years, Al helped provide local farmers with equipment, parts, and repairs.  Al’s son, James (Jim) Ryan, was born in 1974 and the next eighteen years consisted of the many joys of fatherhood. Jim eventually joined Al working on the farm and the two farmed together for many years. In 2005, Al slowly began to retire but still enjoyed being on the farm during the busy times of spring work and harvest.  Al was an avid sports fan that loved watching the Mariners or any other sporting events on television. Preceded in death by both parents and brothers, Paul Haas and Gerald Haas, and sister, Bertha Haas.  Survived by his sister, Margaret Towne; son, James Haas (Shelly); grandchildren Tyler James, Joshua Ryan, and Madison (Maddie) Ann. A Graveside service will be held on Friday, December 15, 2017 at 11:30 a.m. at Rosewood Cemetery followed by a Service at 1:00 p.m. at the Fairfield Community Church, Fairfield, WA.

Alvin (Al) Carl Hass of Fairfield, Washington passed away December 5, 2017.  Al was born May 23, 1930 in Tekoa, Washington to Martha and Carl Haas, and graduated from Fairfield High School in 1949.  After graduation, he worked on the family... View Obituary & Service Information

The family of Alvin Carl Haas created this Life Tributes page to make it easy to share your memories.